Hungary (; Hungarian: Magyarország [ˈmɒɟɒrorsaːɡ]) is a unitary parliamentary republic in Central Europe. It covers an area of 93,030 square kilometres (35,920 sq mi), situated in the Carpathian Basin, and is bordered by Slovakia to the north, Romania to the east, Serbia to the south, Croatia to the southwest, Slovenia to the west, Austria to the northwest, and Ukraine to the northeast. With about 10 million inhabitants, Hungary is a medium-sized member state of the European Union. The official language is Hungarian, which is the most widely spoken Uralic language in the world. Hungary's capital is Budapest and its largest city and metropolis, a significant economic hub, classified as leading global city. Major urban areas include Debrecen, Szeged, Miskolc, Pécs and Győr.
Following centuries of successive habitation by Celts, Romans, Slavs, Gepids and Avars, the foundation of Hungary was laid in the late 9th century by the Hungarian grand prince Árpád in the conquest of the ...

Carpathian Basin. His great-grandson Stephen I ascended the throne in 1000, converting the country to a Christian kingdom. By the 12th century, Hungary became a middle power within the Western world, reaching a golden age by the 15th century. Following the Battle of Mohács in 1526 and about 150 years of partial Ottoman occupation (1541–1699), Hungary came under Habsburg rule, and later formed the great power Austro–Hungarian Empire together with Austria.
Hungary's current borders were established in 1920 by the Treaty of Trianon after World War I, when the country lost 71% of its territory, 58% of its population, and 32% of ethnic Hungarians. Following the interwar period, Hungary joined the Axis Powers in World War II, suffering significant damage and casualties. Hungary became a satellite state of the Soviet Union, which contributed to the establishment of a socialist republic spanning four decades (1947–1989). The country gained widespread international attention regarding the Revolution of 1956 and the seminal opening of its previously-restricted border with Austria in 1989, which accelerated the collapse of the Eastern Bloc. On 23 October 1989, Hungary again became a democratic parliamentary republic.
In the 21st century, Hungary is a middle power and has the world's 57th largest economy by nominal GDP, as well as the 58th largest by PPP, out of 191 countries measured by IMF. As a substantial actor in several industrial and technological sectors, it is the world's 35th largest exporter and 34th largest importer of goods. Hungary is an OECD high-income economy with a very high standard of living. It keeps up a social security and universal health care system, and a tuition-free university education. Hungary performs well in international rankings: it is 20th in quality of life, 24th in Good Country Index, 28th in inequality-adjusted human development, 32nd in the Social Progress Index, 33rd in Global Innovation Index and ranks as the 15th safest country in the world.
Hungary joined the European Union in 2004 and has been part of the Schengen Area since 2007. Hungary is a member of the United Nations, NATO, WTO, World Bank, the AIIB, the Council of Europe, the Visegrád Group and more. Well known for its rich cultural history, Hungary has contributed significantly to arts, music, literature, sports and science and technology. Hungary is the 11th most popular country as a tourist destination in Europe, attracting 14.3 million international tourists in 2015. It is home to the largest thermal water cave system and the second largest thermal lake in the world, the largest lake in Central Europe and the largest natural grasslands in Europe. 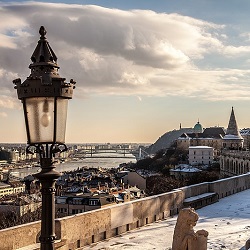