travelo.club - Guide to the country of Sri Lanka

Sri Lanka (Sinhalese: ශ්‍රී ලංකා Śrī Laṃkā, Tamil: இலங்கை Ilaṅkai), officially the Democratic Socialist Republic of Sri Lanka, is an island country in South Asia. Sri Lanka has maritime borders with India to the northwest and the Maldives to the southwest.
Sri Lanka's documented history spans 3,000 years, with evidence of pre-historic human settlements dating back to at least 125,000 years. Its geographic location and deep harbours made it of great strategic importance from the time of the ancient Silk Road through to World War II. Sri Lanka was known from the beginning of British colonial rule until 1972 as Ceylon (). Sri Lanka's recent history has been marred by a thirty-year civil war which decisively ended when the Sri Lankan military defeated the Liberation Tigers of Tamil Eelam (LTTE) in 2009.
A diverse and multicultural country, Sri Lanka is home to many religions, ethnic groups, and languages. In addition to the majority Sinhalese, it is ...

home to large groups of Sri Lankan and Indian Tamils, Moors, Burghers, Malays, Kaffirs and the aboriginal Vedda. Sri Lanka has a rich Buddhist heritage, and the first known Buddhist writings of Sri Lanka, the Pāli Canon, date back to the Fourth Buddhist council in 29 BC.
Sri Lanka is a republic and a unitary state governed by a semi-presidential system. The legislative capital, Sri Jayawardenepura Kotte, is a suburb of the commercial capital and largest city, Colombo.
Sri Lanka has had a long history of international engagement, as a founding member of the South Asian Association for Regional Cooperation (SAARC), and a member of the United Nations, the Commonwealth of Nations, the G77, and the Non-Aligned Movement. Along with the Maldives, Sri Lanka is one of the two countries in South Asia that are currently rated among high human development on the Human Development Index. 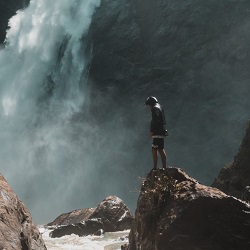