travelo.club - Guide to the country of Montenegro

Montenegro ( MON-tə-NAYG-roh, -NEEG-, -NEG-; Montenegrin: Crna Gora / Црна Гора [t͡sr̩̂ːnaː ɡɔ̌ra], meaning "Black Mountain") is a sovereign state in Southeastern Europe. It has a coast on the Adriatic Sea to the south-west and is bordered by Croatia to the west, Bosnia and Herzegovina to the northwest, Serbia to the northeast, Kosovo to the east, and Albania to the south-east. Its capital and largest city is Podgorica, while Cetinje is designated as the Old Royal Capital (prijestonica).
In the 9th century, three Serbian principalities were located on the territory of Montenegro: Duklja, roughly corresponding to the southern half, Travunia, the west, and Rascia, the north. In 1042, archon Stefan Vojislav led a revolt that resulted in the independence of Duklja from the Byzantine Empire and the establishment of the Vojislavljević dynasty. After passing through the control of several regional powers and the Ottoman Empire in the ensuing centuries, it became a part of ...

the Kingdom of Yugoslavia in 1918, which was succeeded by the Socialist Federal Republic of Yugoslavia in 1945.
After the Breakup of Yugoslavia in 1992, the republics of Serbia and Montenegro together established a federation as the Federal Republic of Yugoslavia, although its status as the legal successor to Yugoslavia was opposed by other former republics and denied by the United Nations; in 2003, it renamed itself Serbia and Montenegro. On the basis of an independence referendum held on 21 May 2006, Montenegro declared independence on 3 June of that year.
Classified by the World Bank as an upper middle-income country, Montenegro is a member of the UN, NATO, the World Trade Organization, the Organization for Security and Co-operation in Europe, the Council of Europe, the Central European Free Trade Agreement and a founding member of the Union for the Mediterranean. 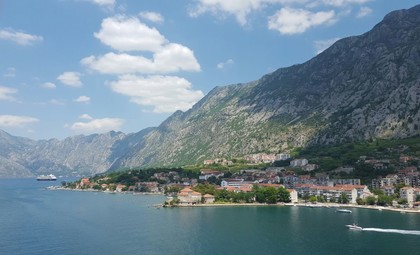