travelo.club - Guide to the country of Estonia

Estonia (; Estonian: Eesti [ˈeːsti]), officially the Republic of Estonia (Estonian: Eesti Vabariik), is a country in the Baltic region of Northern Europe. It is bordered to the north by the Gulf of Finland, to the west by the Baltic Sea, to the south by Latvia (343 km), and to the east by Lake Peipus and Russia (338.6 km). Across the Baltic Sea lies Sweden in the west and Finland in the north. The territory of Estonia consists of a mainland and 2,222 islands and islets in the Baltic Sea, covering 45,339 km2 (17,505 sq mi) of land and water, and is influenced by a humid continental climate.
The territory of Estonia has been inhabited since at least 6500 BC, with Finno-Ugric speakers – the linguistic ancestors of modern Estonians – arriving no later than around 1800 BC. Following centuries of successive German, Danish, Swedish, and Russian rule, Estonians experienced a national awakening that culminated in independence from the Russian Empire towards the end of World War I. During ...

World War II, Estonia was occupied by the Soviet Union in 1940, then by Nazi Germany a year later and was again annexed by the Soviets in 1944, after which it was reconstituted as the Estonian Soviet Socialist Republic. In 1988, during the Singing Revolution, the Estonian Supreme Soviet issued the Estonian Sovereignty Declaration in defiance of Soviet rule, and independence was restored on 20 August 1991.
Estonia is a democratic parliamentary republic divided into fifteen counties. Its capital and largest city is Tallinn. With a population of 1.3 million, it is one of the least-populous member states of the European Union, Eurozone, North Atlantic Treaty Organization (NATO), OECD and Schengen Area.
Ethnic Estonians are a Finnic people, sharing close cultural ties with their northern neighbour, Finland, and the official language, Estonian, is a Finno-Ugric language closely related to Finnish and the Sami languages, and distantly to Hungarian.
Estonia is a developed country with an advanced, high-income economy that is among the fastest growing in the EU. Its Human Development Index ranks very highly, and it performs favourably in measurements of economic freedom, civil liberties and press freedom (3rd in the world in 2012 and 2007). The 2015 PISA test places Estonian high school students 3rd in the world, behind Singapore and Japan.
Citizens of Estonia are provided with universal health care, free education and the longest paid maternity leave in the OECD. Since independence the country has rapidly developed its IT sector, becoming one of the world's most digitally advanced societies. In 2005 Estonia became the first nation to hold elections over the Internet, and in 2014 the first nation to provide E-residency. 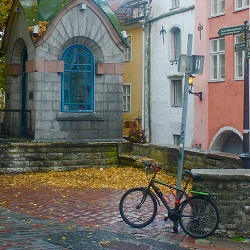