Poland (Polish: Polska [ˈpɔlska]), officially the Republic of Poland (Polish: Rzeczpospolita Polska, listen ), is a parliamentary republic in Central Europe. Poland is a unitary state divided into 16 administrative subdivisions, covering an area of 312,679 square kilometres (120,726 sq mi) with a mostly temperate climate. With a population of over 38.5 million people, Poland is the sixth most populous member state of the European Union. Poland's capital and largest city is Warsaw. Other cities include Kraków, Wrocław, Poznań, Gdańsk and Szczecin.
The establishment of a Polish state can be traced back to 966, when Mieszko I, ruler of a territory roughly coextensive with that of present-day Poland, converted to Christianity. The Kingdom of Poland was founded in 1025, and in 1569 it cemented a longstanding political association with the Grand Duchy of Lithuania by signing the Union of Lublin. This union formed the Polish–Lithuanian Commonwealth, one of the largest (about 1 ...

million km²) and most populous countries of 16th and 17th century Europe with a uniquely liberal political system which declared Europe's first constitution.
Following the partitions of Poland at the end of the 18th century, Poland regained its independence in 1918 with the Treaty of Versailles. In September 1939, World War II started with the invasion of Poland by Nazi Germany, followed by the Soviet Union invading Poland in accordance with the Molotov–Ribbentrop Pact. More than six million of Poland's citizens died in the war. After World War II, the Polish People's Republic was established as a satellite state under Soviet influence. In the aftermath of the Revolutions of 1989, most notably through the emergence of the Solidarity movement, Poland established itself as a democratic republic.
Poland is the eighth largest and one of the most dynamic economies in the European Union, simultaneously achieving a "very high" ranking on the Human Development Index. Additionally, the Polish Stock Exchange in Warsaw is the largest and most important in Central and Eastern Europe. Poland is a developed and democratic country, with a high-income economy, and a very high standard of living. It also ranks very highly in education, safety and economic freedom. According to the World Bank, Poland has a leading school educational system in Europe. The country provides free university education, state-funded social security and a universal health care system for all citizens. Situated between Eastern and Western European cultures and coined by a changing history, Poland developed a rich cultural heritage, including numerous historical monuments and 14 UNESCO World Heritage Sites. It is visited by approximately 16 million tourists every year (2014), making it the 16th most visited country in the world. Poland is a member state of the European Union, the Schengen Area, the United Nations, NATO and the OECD. 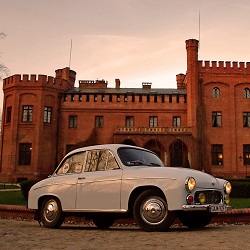